Chilean Contractor Ingenieria Civil Vicente S.A. (ICV) built a channel (sluice) to carry crushed copper ore from inside the mountain to a smelter in the valley. The crushed ore was mixed with water and put in the concrete channel (80 kilometers long at a 1% grade) to flow to the smelter by gravity.

The channel at Codelco’s Minera Andina Mine is located near Los Andes in the Acongaqua Valley, an area principally known for its wine producing vineyards. The mine is also 20 miles from a popular ski resort in the Andes Mountains and 100 miles from Santiago, Chile.

The channel, which was 1.3 meters high by 1.3 meters wide, had been partially hand built with forms by other contractors. However, the process was very slow and the concrete was difficult to deliver to the forms because the channel went inside the mountain and through various tunnels of limited space.

Power Curbers of Salisbury, NC along with ICV, developed a research project to test whether they could slip-form the concrete channel with equipment used for barrier walls. Initial tests were successful with the slip-form paver, except for delivering concrete to the site and feeding the paver in confined spaces.

With the near vertical walls of the channel, the mix design of the concrete had to be exactly controlled and the slump of the concrete could not vary more than 2 cm. The contractor’s target slump was 4 to 5 cm. The harsh mix with 38 mm maximum size aggregate can be compared to slip-form concrete supplied for airport pavement.

ICV is familiar with slip-form paving, having the first CMI slip-form paver and Hagan Central Mix Plant in Chile. The channel was slip-formed in three separate stages: Stage 2: Using the same machine with a different mold, the sides of the channel were formed at 1.30 meters high by 1.33 meters wide using 0.8 cubic meters of concrete per linear meter of channel paved.

Stage 3: A special mix of extremely hard aggregates and a high ratio of cement was used for the bottom liner of the channel. The liner was 10 cm high by 75 cm wide because the copper ore was extremely abrasive.

The Maxon equipment was delivered to Chile in early 1997. The biggest challenge initially was timing the simultaneous dumping of the truck-mounted units, remixing the concrete in the Mobile Maxcrete, and properly feeding the slip-form paver at the correct speed.

However, ICV was able to place over 1,600 linear feet of concrete per day, an 800% improvement from the 197 linear feet per day formed by the previous contractor.

Since the surrounding mountains are rich in copper deposits, other mines may adopt this method of moving ore from the mountain to the smelter. ICV hopes that their success will result in additional contracts at various Chilean mines for many years to come. 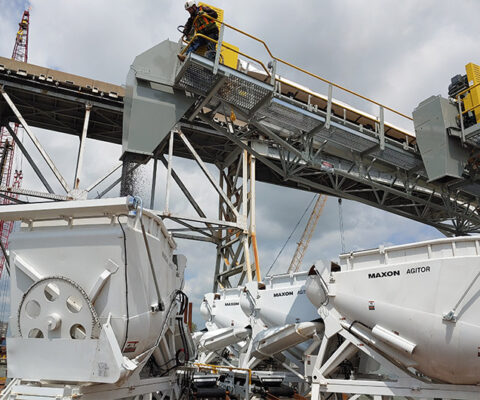 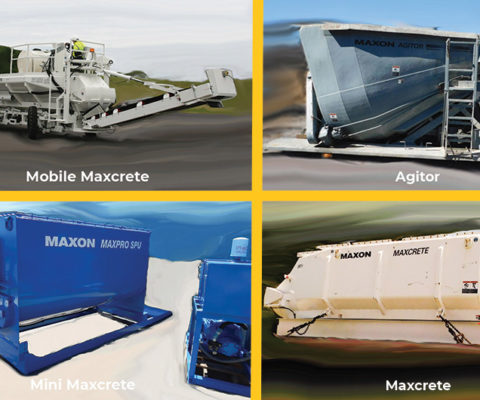 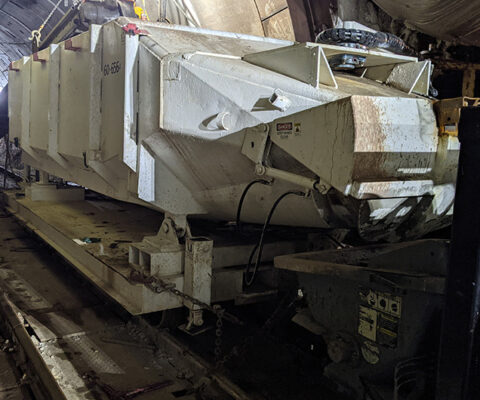 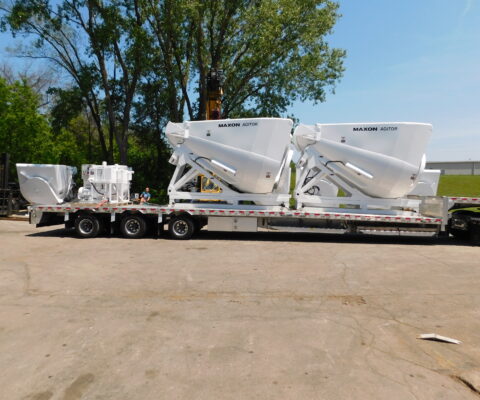 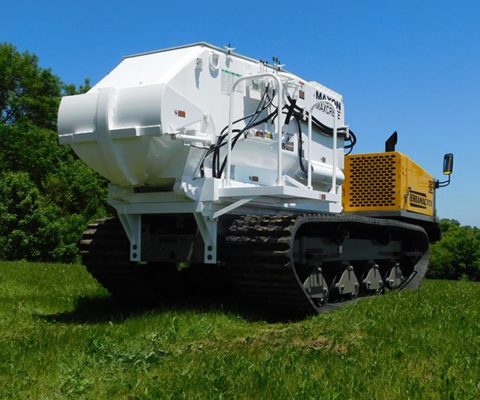 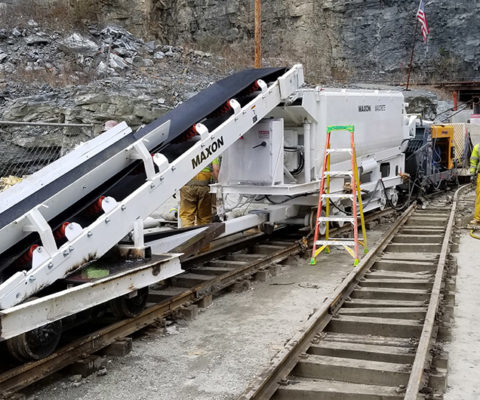 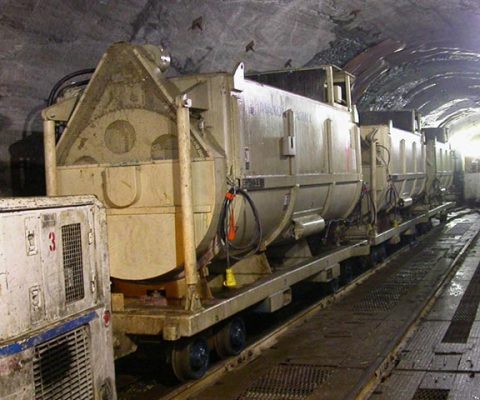 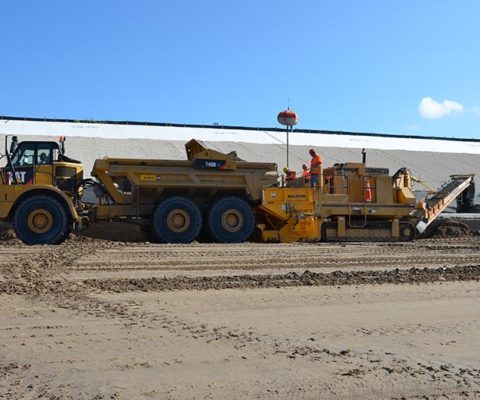 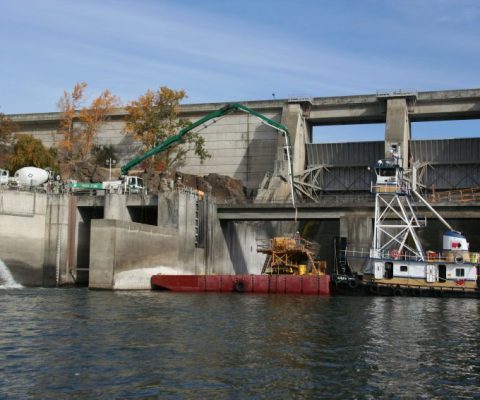 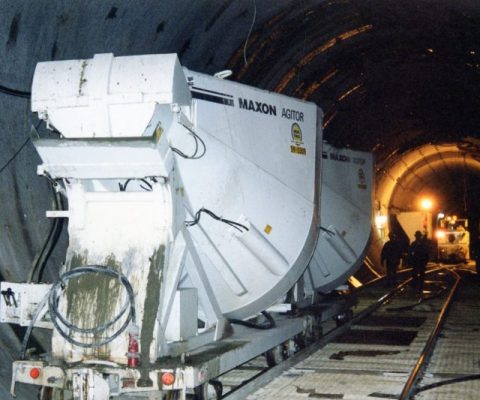 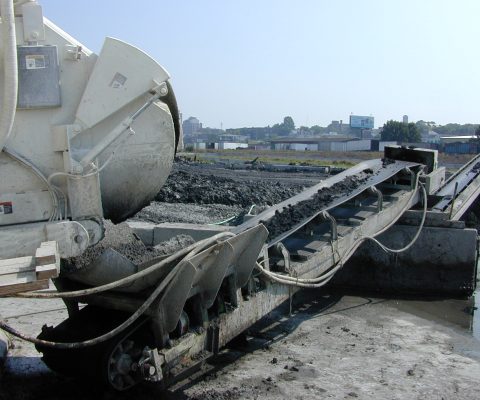 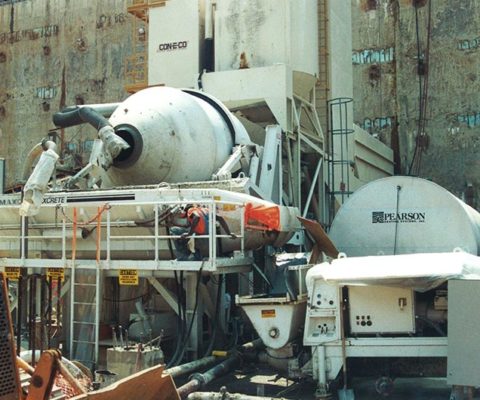