The Dalles Dam Spillway Bay 8 And 9 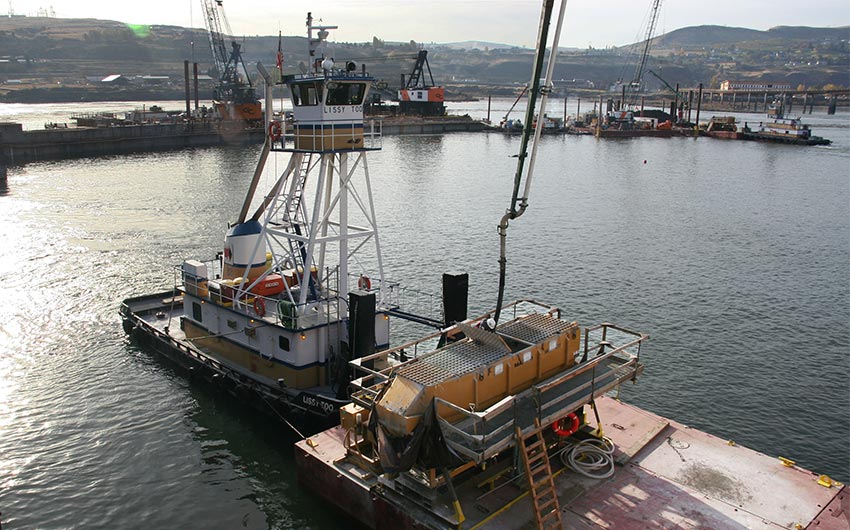 Maxon Maxcrete is loaded from shore via boom pump, while 2nd Maxcrete (upper right) is feeding the placing system.

The Dalles Dam is a hydroelectric dam spanning the Columbia River, two-miles (3 km) east of the city The Dalles, Oregon (it joins Wasco County, Oregon with Klickitat County, Washington). The Dam has been the site of a U.S. Corps of Engineers project to improve survival rates of out-migrating young salmon that pass over the Dam spillway.

The Dalles Dam spillway is the primary downstream passage route for migrating juvenile salmon travelling down the Columbia River. Researchers found in previous studies that the young salmon had low survival rates after passing through the spillway. In 2004, the Corps constructed a short spillway wall (Spillway 5/6) in an attempt to increase survival rates. Unfortunately, even with the short wall, survival rates were still low due primarily to predator fish and birds in the low flow area directly past the spillway that fed on the young disoriented salmon.

Further Corps’ studies found that young salmon would have higher survival rates if they were delivered over the spillway and into the river’s thalweg (the deepest portion of the channel). This would allow more time after passing over the spillway for the fish to be reoriented in the deep water area where predator fish do not like to swim. 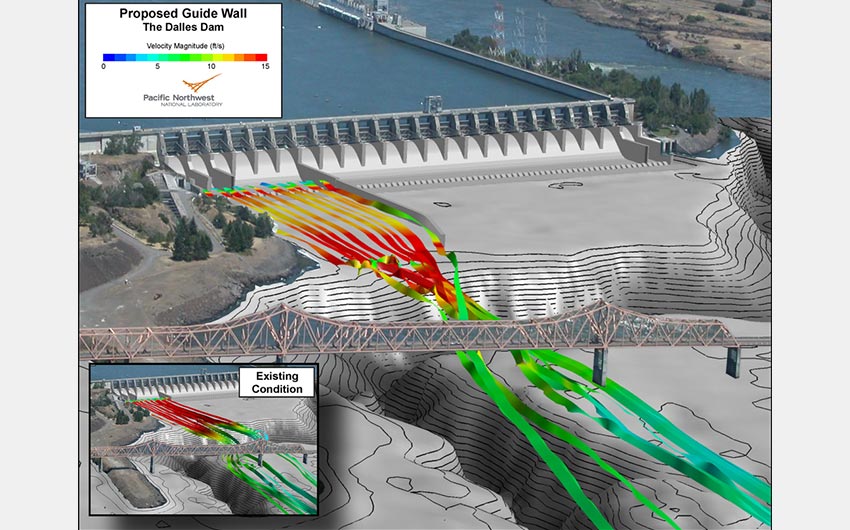 In early 2008, the U.S. Corps of Engineers awarded the $45 million Dalles Dam Bay 8 and 9 Spillway Wall project to General Construction Company (A Kiewit Corporation Subsidiary) to construct an 830-foot wall extending downstream from the spillway/dam to increase survival rates.

CONSTRUCTION OF THE WALL

The wall consists of 43 precast blocks placed on top of rut slabs poured directly on the river floor. Because of the expedited need to increase the survival rates of the fish the project was fast tracked for total completion in less than 2 years. Adding to the difficulty of the project, General was only allowed to work on the river roughly half of the year when the dam was not spilling water. Precise time and placement schedules had to be adhered to ensure the project was done on time.

“We had previous success with Maxon equipment on the Bay Bridge project and looked to them again when we knew production up-time and quality concrete would be critical to our success.” 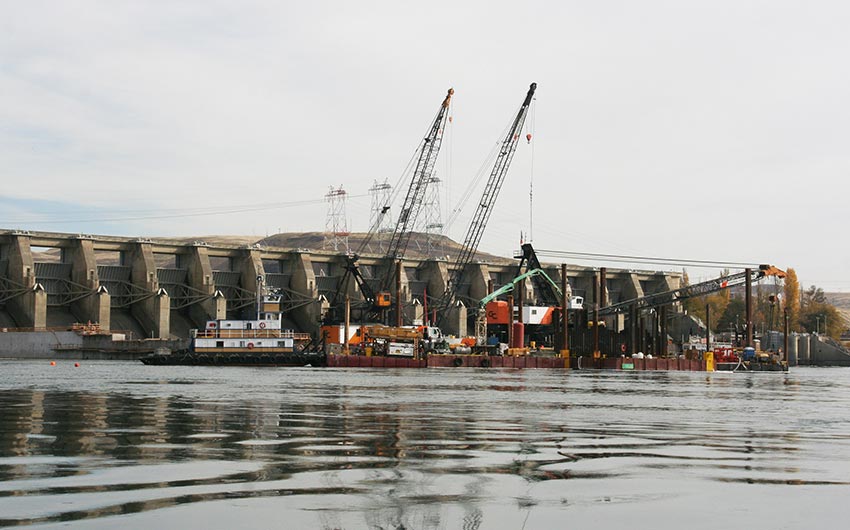 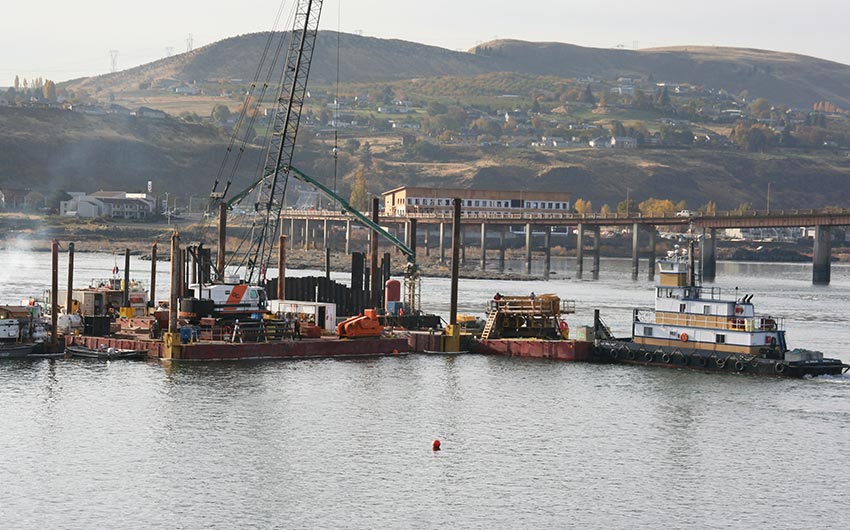 General would take roughly 5 days to setup/pour/tear down and move for each of the 17 rut pours. “The total setup worked seamlessly,” commented Bowman. They constructed a moon pool roughly 70’ by 20’ by driving piling into the riverbed. Each of the concrete pours would range from 80 to 300 cubic yards depending on the contour in the river bed – average rut pours were 120 cubic yards each, producing a slab of roughly 1-5’ thick (on top of which the concrete precast sections were placed to form the wall). The water in the area directly downstream of the dam is as shallow as 8-12’ allowing divers to work quickly in 4 to 6 hour shifts.

The concrete for the rut pours consisted of a ¾” minus aggregate self leveling mix with roughly a 20″+ spread, and included anti-washout/Devo to allow for direct placement underwater. 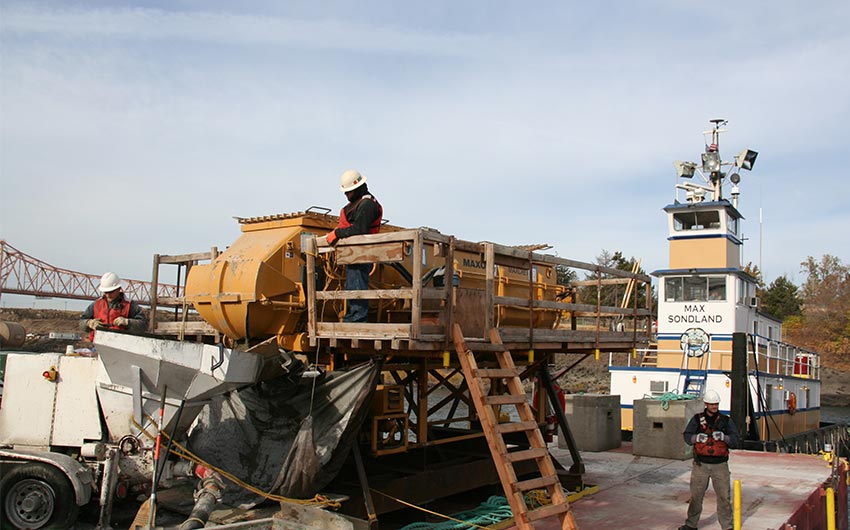 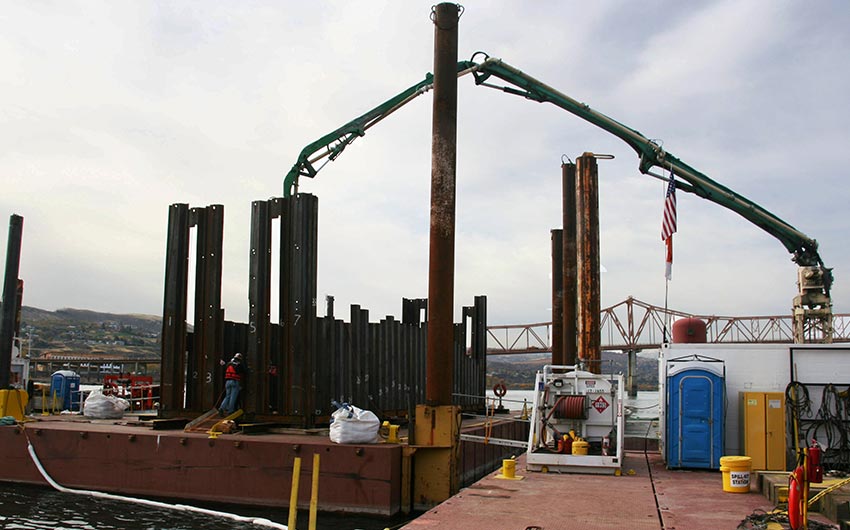 The concrete for the rut pours was supplied in 9 cubic yard truck mixers from a local ready mix company delivered at 20 minute intervals. A 36 meter concrete boom pump parked high above the riverbed on the dam was used to transfer the concrete to the awaiting barge mounted Maxon Maxcrete surge hoppers. The Maxcrete’s large open top allowed for quick easy transfer. Two barges worked in tandem with one barge loading at shore while the second was discharging its full 9 yards to a trailer pump and 32 meter Putzmeister placing boom on the barge stationed in the middle of the river.

Pump rates were fairly slow at times, which required the Maxcrete operator to “feather” the Maxcrete’s discharge gate to match the speed of the concrete delivery to the Putzmeister placing boom. The Maxcrete has remix ability allowing the concrete within the 16 paddle Maxcrete to be re-tempered as needed. 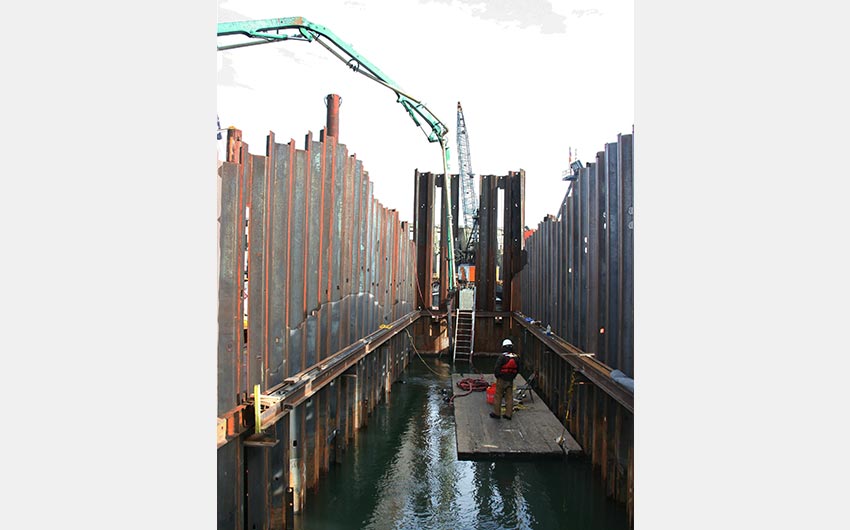 One of the other concerns with the project was the environmental sensitivity. “Really, we had a very clean operation. The Maxcretes (one equipped with a diesel power pack and other electric) performed without issue, and concrete spillage into the river was eliminated by marrying the height of the Maxcrete discharge to the pump hopper,” commented Bowman. The project sits in the shadow of Mount Hood and Multnomah Falls in what is considered a very eco-sensitive area. 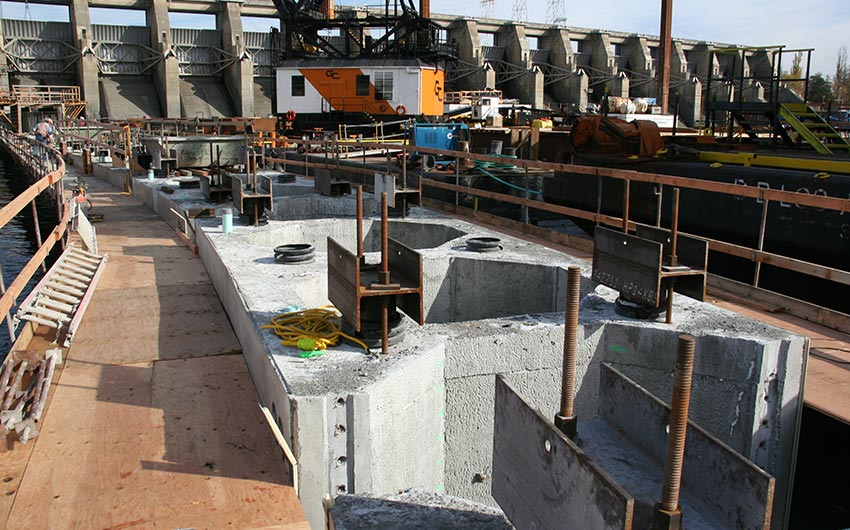 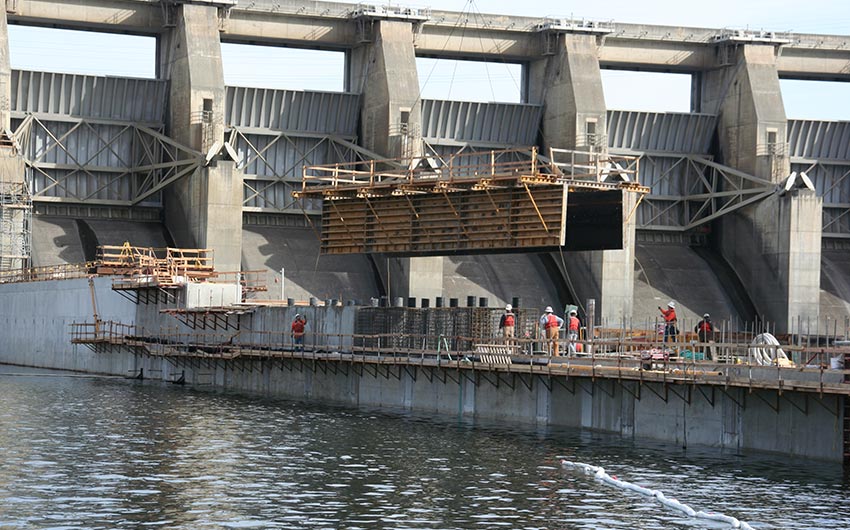 The rut slab team finished the last of the pours in fall of 2009, with the precast team putting the finishing touches shortly thereafter.

The precast sections were poured on land and barged out to be placed/lowered onto the previously completed rut slabs. The two were then drilled and tied in using 10 rod strands, and completed with tremmie pours, filling in the precast sections. The concrete for this final portion of the job was placed with a trailer pump on shore with a slick line that ran across the top of the dam and then out the wall as each new section was capped and completed. Again the Maxcretes were used as surge hoppers to accept waste concrete from the pump/slick line in case of any failure in the system. The excess concrete would be placed into the Maxcrete and continued to be agitated until it was delivered back to shore for disposal.

“Even though we had to work around the dam and fish migration schedules, we are ahead of schedule and anticipate being under budget,” reflected Bowman with a smile on his face. He’s looking forward to his next well-run project.