Maxcrete Solidifies Over 250,000 Cubic Yards of Mine Tailings for Re-use as Backfill 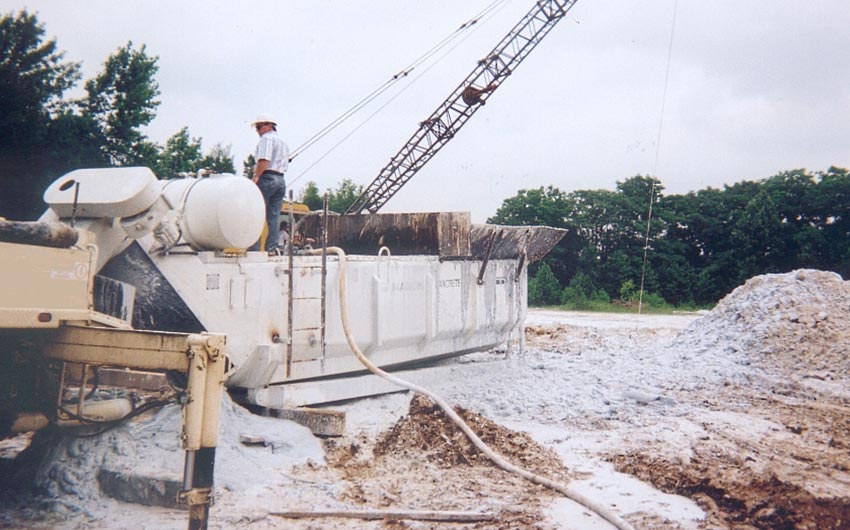 Redland Genstar, Inc. in Baltimore, Maryland purchased a new Maxon Maxcrete for use in processing mine tailings from a sediment pond. The process included the excavation, mixing and pumping of the material into an abandoned underground mine located adjacent to the sediment pond.

The pond sediments consisted of:

Particle size was generalized as 100% passing 30 mesh and 70% passing 325 mesh, but there were considerable extraneous materials ranging from sticks, roots, tree stumps and other foreign objects disposed of in the pond over its 60 year life.

One cubic foot of sludge weighed 120 lbs. and the approximate percent, solids ranged from 74% to 78%.

The sludge was excavated from the pond using a one cubic yard drag line bucket. When excavated, the material was similar in consistency to a chalk-like paste. When the slump test was performed, the material ranged from 4” to 10.”

The drag line bucket excavated the material and dumped directly into the top of the Maxcrete. The Maxcrete was modified to include a charge hopper 5’ wide by 10’ long positioned at the charge end of the mixer. The charge hopper was mounted directly to the top of the Maxcrete and included a steel grizzly with a 4” by 8” configuration. The grizzly would catch larger items including stumps, roots and other miscellaneous items.

The drag line bucket continuously fed sludge to the Maxcrete at a rate of 1 yard per 40 seconds while the Maxcrete mixed and discharged the material. Total product per hour was 120 tons/80 cubic yards per hour. Production was primarily limited by the capacity of the concrete pump and the loading time of the drag line operation. 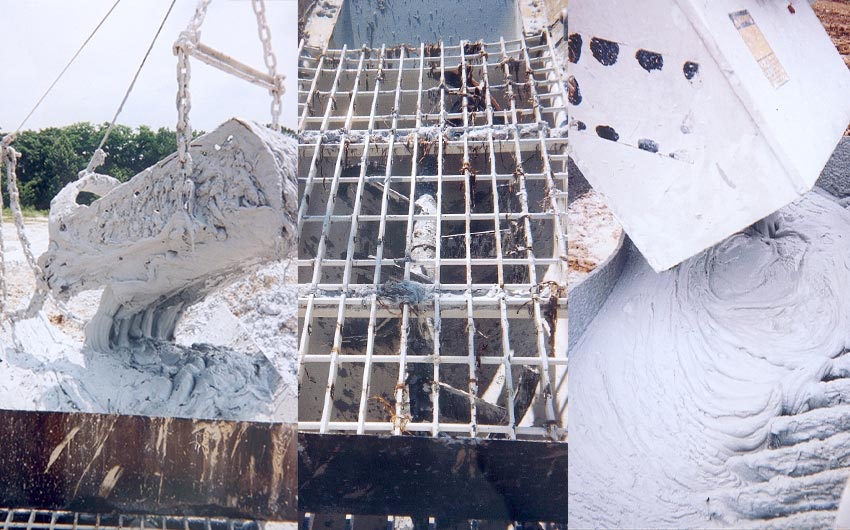 In addition, it was advantageous to increase the slump from 9.5” to 10”, thus requiring the introduction of water. Along with the 5% cement, water was added on demand based upon random slump testing and visual observation.

The cement grout mixture was added to the sludge inside the Maxcrete to increase the psi of the material. Thorough mixing was confirmed through both visual inspection and testing performed regularly on the output from the Maxcrete.

The boom pump then pumped the sludge into a drop hole. The drop holes were bored at various locations above the abandoned mine. The sludge then fell through the drop hole an additional 60 feet. The material did not release water upon being deposited in the underground mine.

The entire remediation process was mobile, allowing the contractor to move the Maxcrete and pump around the pond, minimizing the distance the drag line had to move.

The final product provided a flow able fill to backfill various mining cavities. The project allowed the owner of the sediment pond to accomplish three tasks: