Lake Mead feeds over 90% of the fresh water to the Las Vegas, NV area. During an 11 year drought, water levels have dropped significantly, placing one of the two horizontal underwater intake shafts in danger of being above the water level. Impregilo/Healy JV was awarded the $800 million contract to construct a 20’ diameter – 3 mile long tunnel under Lake Mead including a new intake structure at the bottom of the lake. The JV turned to Maxon to supply barge mounted concrete placing equipment for the continuous 12 day pour to seat the new intake structure 375’ below the Lake Mead surface.

Seating the intake structure to the bottom of the lake took a single 12,000 cubic yard continuous concrete pour. (Prior to the pour, the JV constructed the 1,200 ton precast concrete intake structure on shore, barged it out on the lake, and lowered it into position). Concrete for the pour was batched on land, and eight 10 cubic yard. redi-mix trucks at a time were loaded and transported on one of three barges to the pour site 2 miles from shore, where the mixers would discharge concrete directly to the Maxon concrete system on the placing barge.

The placing barge was equipped with two complete Maxon concrete placing systems (one system would be operational while the second was on standby for maintenance and backup). Each system included: two 40’ Maxon Conveyors, a Maxon 10 cubic yard  Maxcrete remix surge hopper, a Putzmeister 14000 trailer pump, and a 38 meter Putzmeister tower mounted placing boom. One 40’ Maxon conveyor would receive concrete from the redi-mix trucks and then transfer the concrete to a second Maxon 40’ conveyor to elevate the concrete into the Maxon Maxcrete remix surge hopper. The Maxcrete, with bi-rotational agitator shaft, allowed the JV to re-temper the concrete as needed from the 1,200+ loads of concrete from the mixers, ensuring quality concrete from the first yard to the last.

The 10 cubic yard Maxcrete also provided surge capacity during the transition when the first transport barge would pull away and the next would arrive, permitting a true continuous pour with the concrete pump. A sub platform for the Maxcrete elevated the unit so that it could discharge directly into the pump hopper. 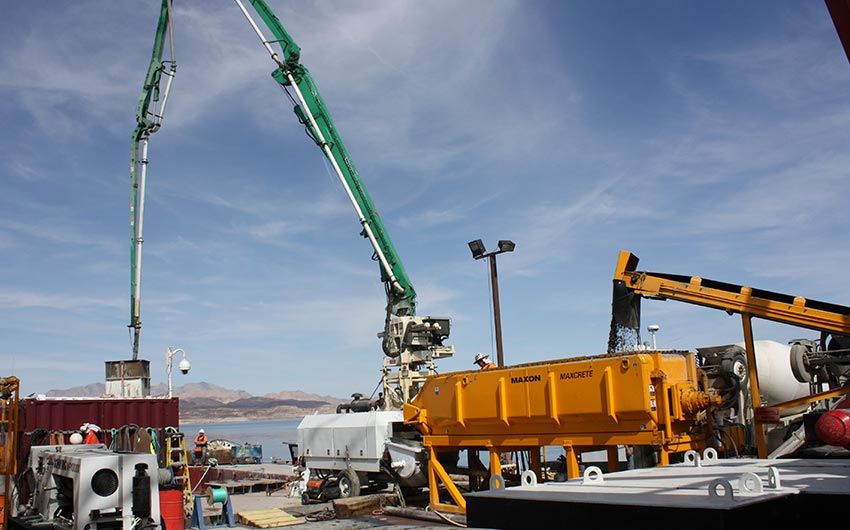 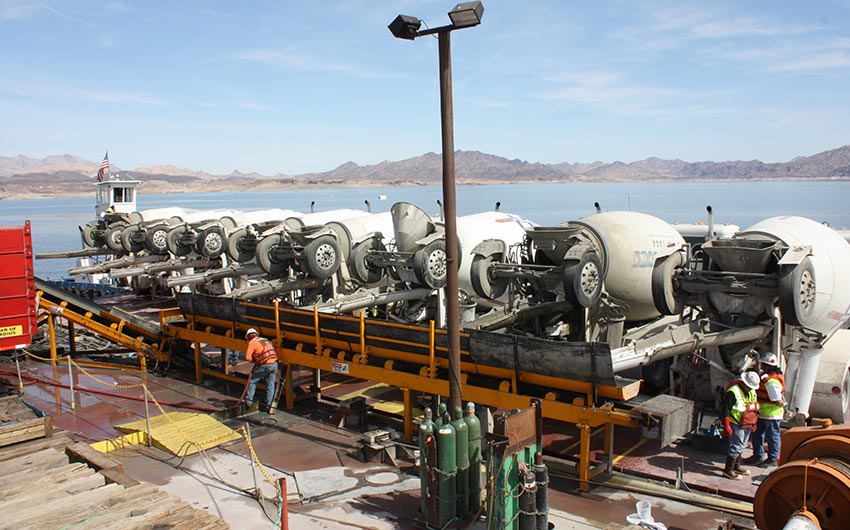 The Putzmeister 14000 trailer pump and tower mounted boom placed the concrete in the tremie pipe. 375’ below the surface the JV employed sonar, GPS sensors and a remote-controlled submarine to constantly monitor the pour (no divers were used).

The JV utilized a concrete mix design that allowed up to a 30 hour window before setup. While there was a slight delay for weather (50-60 mph winds buffeted the placing barge one day, forcing a brief stoppage) the 12,000 yard pour concluded in just 12 days. Giovanni Pireddu, Offshore Manager for the JV commented after the exhausting pour, “We would like to thank all the suppliers, consultants, who dedicated themselves to the successful performance of this unique task.”