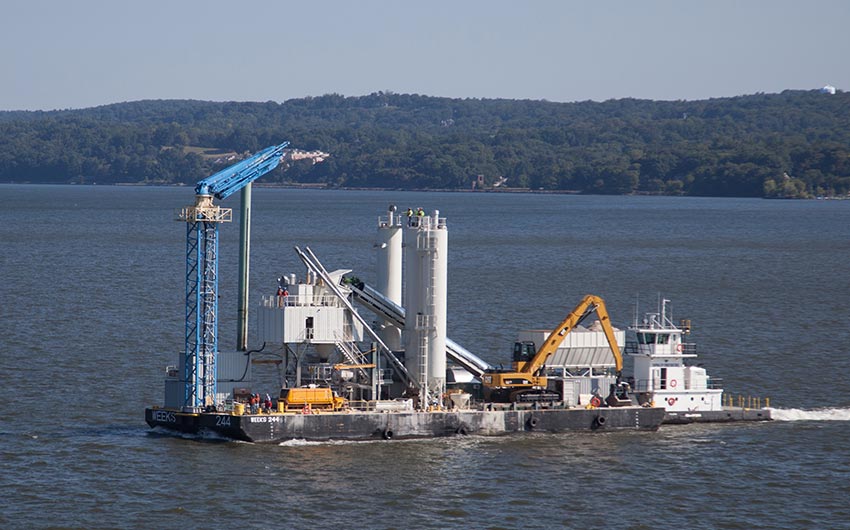 One of the two concrete placing barge systems Maxon Industries supplied Tappan Zee Constructors with as well as supplies for a material barge.

The New NY Bridge, at over $3.9 billion, is the largest bridge and highway infrastructure project under construction in North America. A replacement of the existing Tappan Zee Bridge, the New NY Bridge, is being constructed by Tappan Zee Constructors LLC (TZC), a joint venture of Fluor Enterprises, Inc., American Bridge Company, Granite Construction Northeast, Inc., and Traylor Bros., Inc. Over the next five years, TZC will place over 300,000 yards of concrete in constructing the cable-stayed bridge, including the 419’ towers that support the 1,200’ main span. With an eye toward reducing construction traffic leading to the bridge and minimizing environmental impact, TZC turned to the concrete experts at Maxon Industries to provide two complete floating concrete plant/placing systems.

The Tappan Zee Bridge, opened in 1955, now handles over 138,000 vehicles every day – exceeding the initial designed capacity. It lacks lanes/shoulders for emergency vehicles or disabled cars, creating daily traffic jams. Plans to replace the Tappan Zee Bridge were first discussed in 1999. Over the next decade, numerous plans, studies, meetings (430) and concepts (150) were considered. In early

2013, after review of three design/build proposals, the JV of Tappan Zee Constructors LLC was selected to replace the existing bridge. The new bridge will include eight general traffic lanes, four breakdown/emergency lanes, a bike and pedestrian path, enhanced express bus service, and will be mass-transit ready to accommodate future public transportation.

Due to the confined space in the tunnel, special Maxon concrete carriers were mounted on the customer’s Mack trucks to discharge the concrete into the Mobile Maxcrete quickly while operating in the tunnel’s confines. 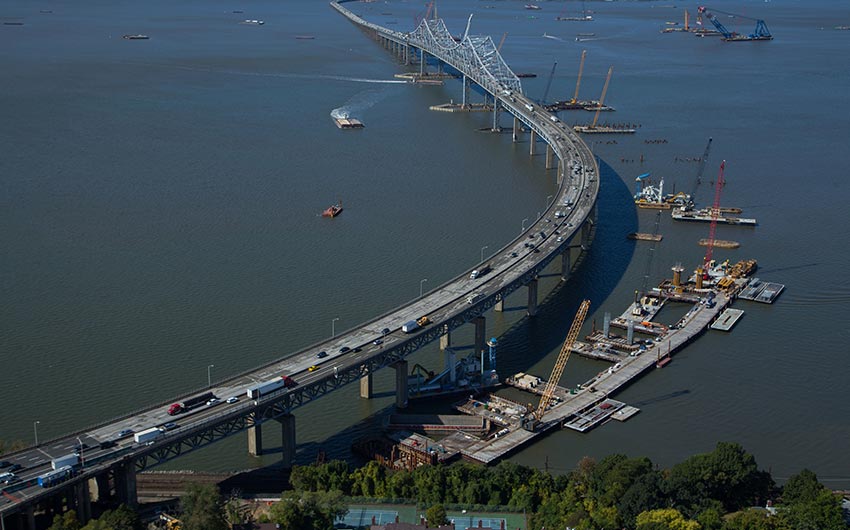 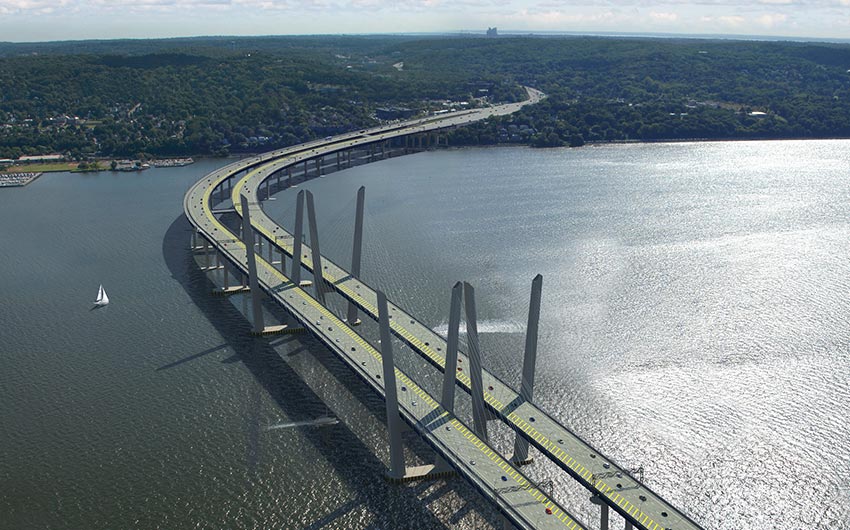 TZC contracted with Maxon to provide a complete engineered solution for concrete production and placement. Key to the proposal for TZC was providing a comprehensive system: bringing together concrete equipment from a number of manufacturers while providing them with a single point of contact.

Maxon’s proposal included two identical concrete production and placing systems on barges. The systems eliminate the need for over the road hauling of concrete from local concrete plants and ensure the best quality control. With a short placing window of under 3 years (total project 5 years) the twin concrete systems were designed with speed and efficiency in mind. Wayne Dabrowski, Project Engineer for Tappan Zee Constructors LLC., “Maxon’s efforts to ensure these systems were procured, delivered, assembled and producing quality concrete speaks volumes about Maxon Industries abilities.”

Maxon supplied all of the following the components for two floating concrete plant/placing barge systems:

Additionally, Maxon supplied the following for the material supply barges: 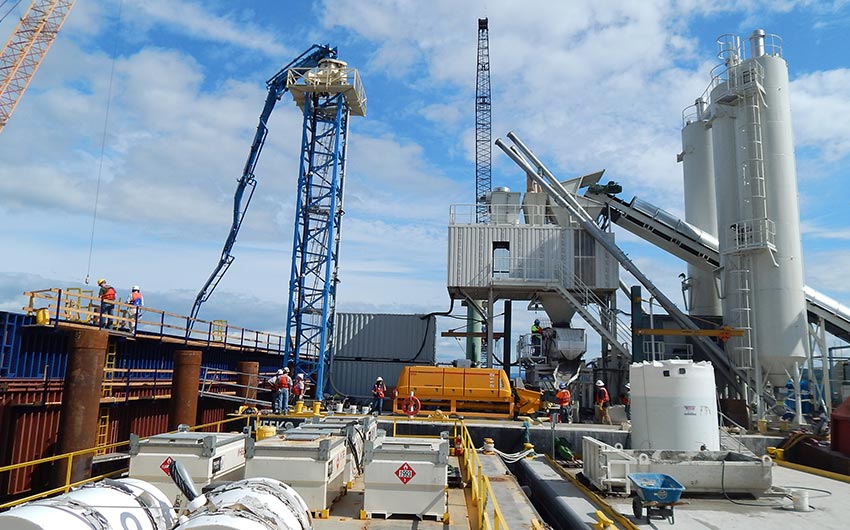 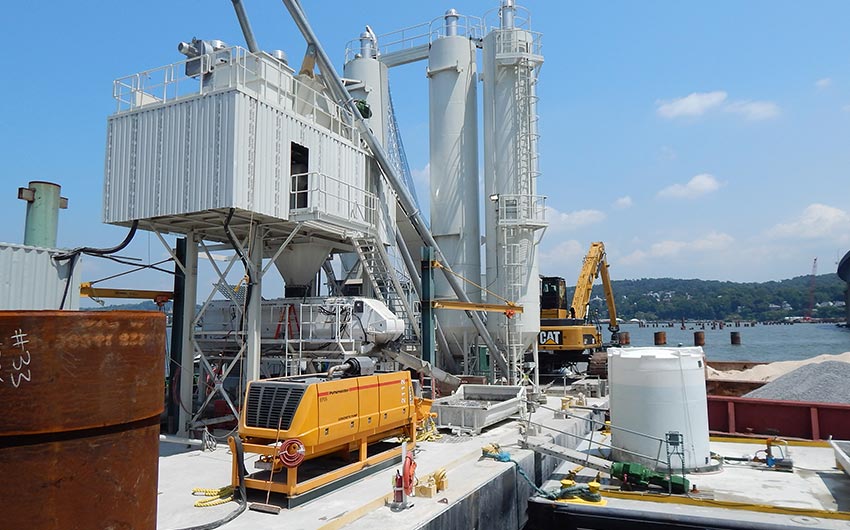 Crucial to TZC’s success on the project are two modular concrete plants supplied by Maxon, each capable of producing up to 240 Yds. Per hour. Each plant incorporates a 6 cubic yard twin-shaft BHS Batch Mixer offering excellent concrete homogeneity with short cycle times.

The modular plants allow for rapid installation and require less maintenance during the life of the project. The compact plant layout provided a small footprint for the concrete production/placing barges. 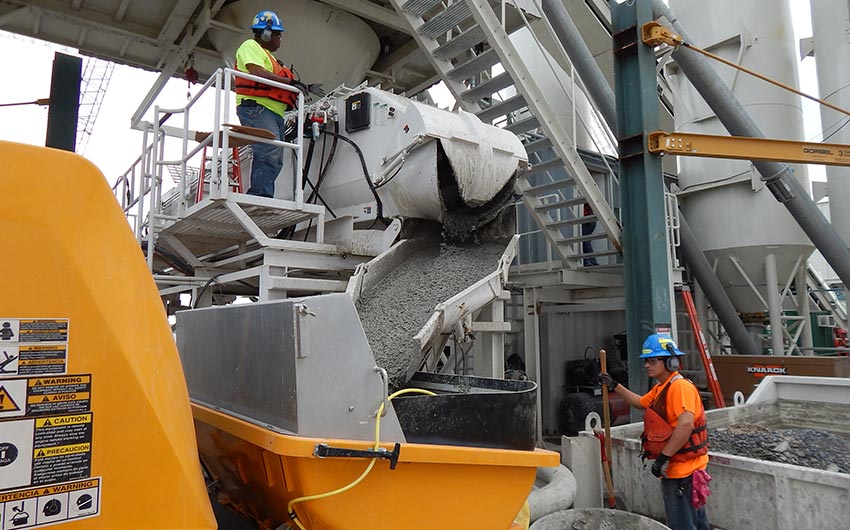 Central to TZC’s ability to rapidly produce and place concrete are the remix surge hoppers under each plant. Maxon supplied 18 cu yd Maxon Maxcrete remix surge hoppers (one for each concrete production barge) that can be simultaneously loaded from the plant while feeding concrete to the trailer pump/placing boom. The Maxon Maxcrete’s large surge capacity (24 yard struck) allows the plant to continue to produce load after load of concrete even if the concrete placement rates vary. Should extended delays occur, the ASTM rated Maxcrete can remix the entire load, allowing TZC to re-temper the concrete or add concrete additives post the initial concrete production.

Each Maxcrete includes a hydraulically operated gate with infinitely variable discharge rates to match the speed of the concrete pump production. For rapid cleanout at the end of the pour, Maxon installed a hydraulic knife gate on the bottom of the Maxcrete shell so fluids from wash-down can be contained and discharged into the cleanout trough (thus abiding to the stringent environmental standards for concrete production on the river). 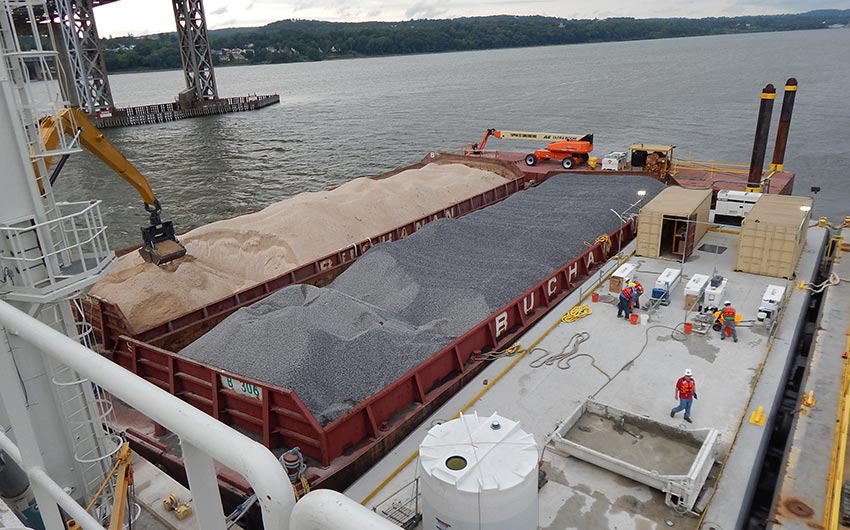 To allow concrete production to continue year round, Maxon supplied TZC with water heaters and chillers for each production barge. During winter months, when temperatures frequently fall below freezing, direct fired tanks supply heated water to the concrete plants. To control the heat of hydration during placement of the large mass pours during the summer, 80 ton water chillers provide super-cooled water from the tank to the concrete plant.

In early July 2014, the first concrete production/placing barge was put into service, supplying the concrete for the structural support piling caps. The bridge will require over 1,000 steel tubes/pilings each filled with steel reinforced concrete and then tied together with concrete caps. During initial bridge construction, TZC is building the bases that will support the main 419’ towers.

Once the bases are complete, TZC will use the production/placing barges to pump concrete to the forms as the towers continue to grow. After reaching 139 feet above the water level, the prefabricated road sections will begin to be installed as the towers continue to be built. The primary cables that transfer the road load to the towers will then be run from the edge of the road deck to the angled towers as the bridge extends over the water, eventually creating the 1,200’ main span. Additional pilings will be driven into the riverbed and the smaller concrete support columns for the approaches will also be placed from the concrete production/placing barge. As the first span is completed, westbound traffic will be shifted from the Tappan Zee Bridge to the New NY Bridge, with the eastbound traffic scheduled to shift upon completion of the second span in late 2017.

As the Mario M. Cuomo Bridge was completed in 2018, they demolished the old Tappan Zee Bridge. Watch Fox News video: