The Rest of the Story... 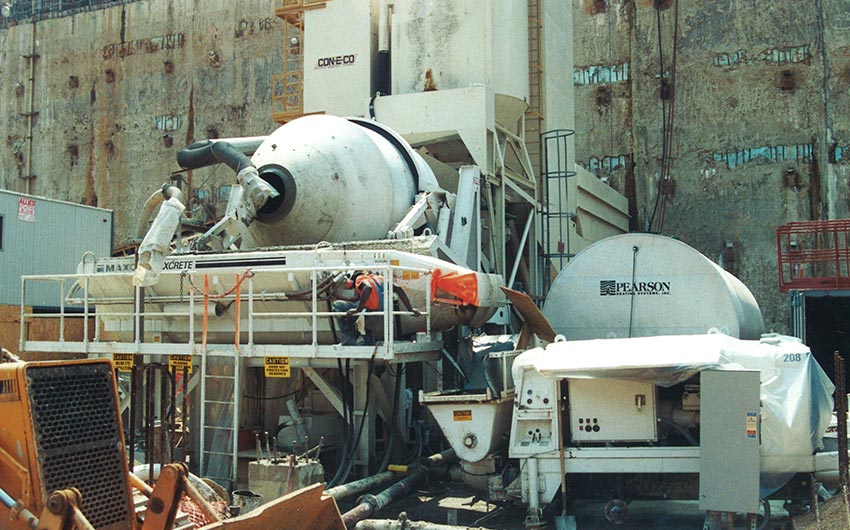 Behind the headlines is a successful pumping job...

In late August, members of Congress expressed surprise at the price tag on the new Federal Triangle Building in Washington, D.C.

Though newspaper headlines have focused on the total cost of the project, the folks at Schwing, Maxon and Brundage-Bone have a more intimate perspective, having worked on the project for over a year now.

There’s a story behind the headlines that has nothing to do with Congressional approval of construction budgets. It’s an epic tale about the strategic use of people and pump s to pour 248,122 cubic yards of concrete to create a nine-story, all-concrete office building in Washington, D.C.

As of July ‘94, contractors had placed nearly two-thirds of the concrete necessary for the new Federal Triangle Building … and had just reached grade level. The 60 ft. deep, eight-and-a-half acre excavation for the building is located along the Potomac River. 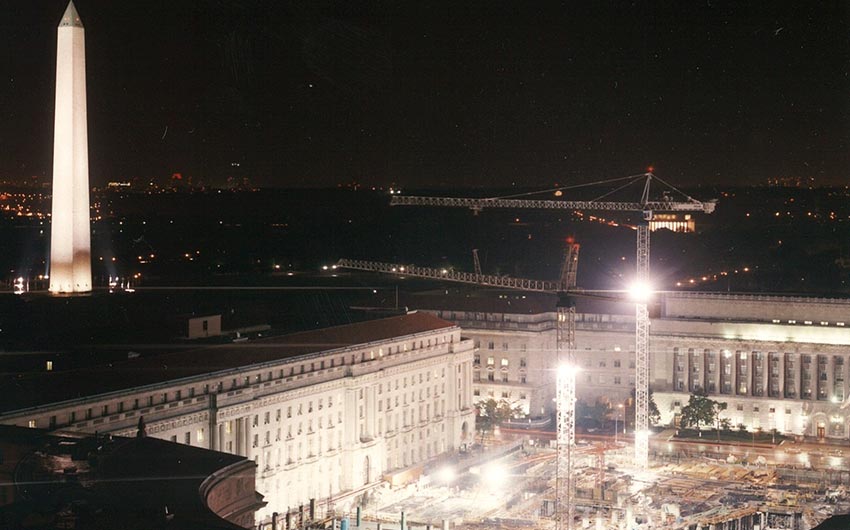 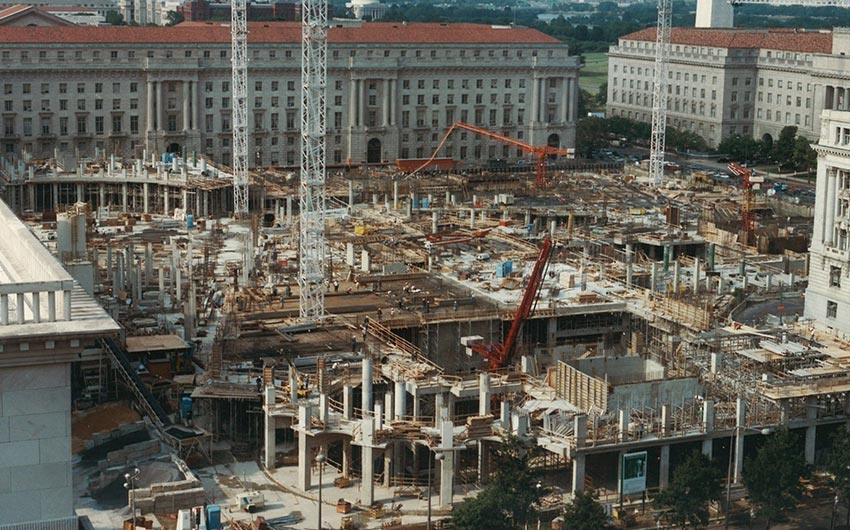 Following excavation that reached some 50 feet below the Potomac River bed, a network of drainage pipe was placed to carry seepage to seven pump out locations. A porous concrete back fill containing 3/8-inch pea gravel was spread, covered with a membrane and topped with a 12-inch slab reinforced with two layers of No. 5 bar. The system is engineered to withstand any hydrostatic uplift that fails to drain through the piping.

Pumping the mix from street level would have required frequent pump and line relocations to provide coverage of the 375,000 square foot L-shaped site. Instead, E-Quality Concrete placed its Con-E-Co Lo-Pro plant at excavated grade (seven stories below street level) on a west perimeter wall near 14th Street. Having the concrete batch plant and raw materials onsite meant concrete production during daylight hours could continue uninterrupted without concerns about delivery of ready mix from regional batch plants.

During off-peak traffic hours, coarse and fine aggregates were delivered to the site and dropped by enclosed conveyor belt from the street to the plant. Raw materials were bulk stored on the basement floor.

From the plant’s Erie-Strayer drum mixer, concrete was discharged into a 10 cubic yard capacity Maxcrete Remix Surge Hopper by Maxon. The Maxcrete Remix Surge Hopper was mounted on the sub-frame directly below the central mix concrete plant. The plant batched in 10 yard quantities and discharged directly into the Maxon Maxcrete, which acted as a remix hopper and a surge hopper to feed multiple pumps. The remix capability provided quality concrete, while the surge capability assured the availability of concrete to feed pumps at all times. 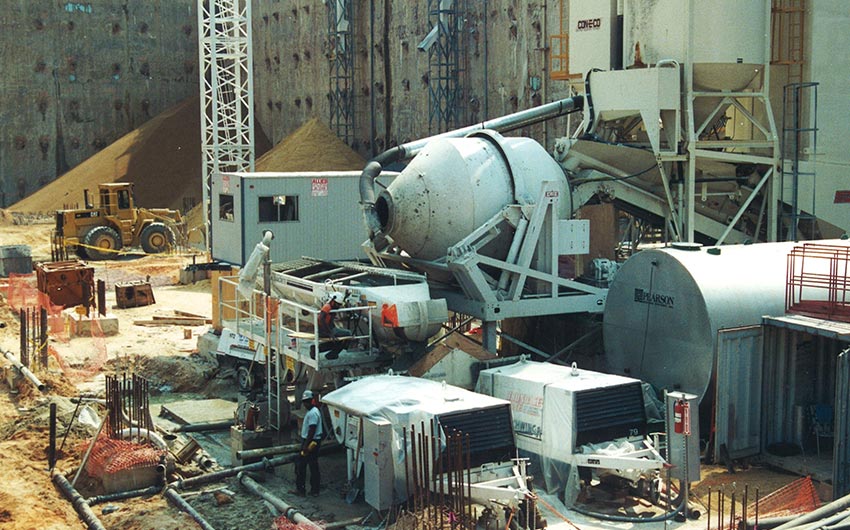 While the Maxcrete Remix Surge Hopper fed the concrete pumps, the batch plant would mix another 10 yards of concrete. One of the special features of the Maxcrete was a shuttle that can discharge into multiple concrete pump hoppers at the same time and allowed the unit to feed either or both concrete pumps simultaneously.

Once the building reached ground level the batch plant, concrete pumps and Maxon Remix Surge Hopper were moved to a small area on the existing site directly above a portion of the parking structure. Space constraints demanded that batch plant, remix surge hopper and pumps be located very close to one another. The Maxcrete’s ability to feed two concrete pumps at the same time helped, as did a discharge valve on the charge end of the unit which fed a concrete bucket or third pump as necessary. 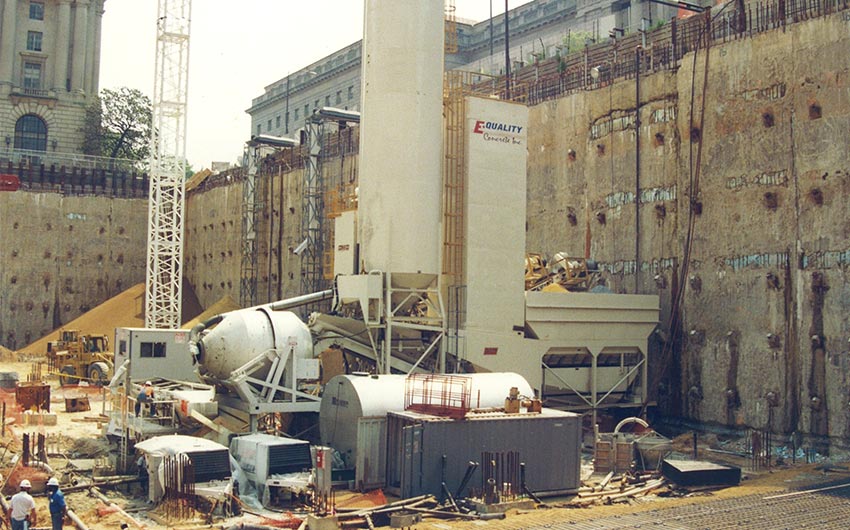 Tompkins selected two Schwing 3001 electric, trailer-mounted pumps for the job. The Schwing 3001 is capable of pumping mix for 3,000 ft. horizontally, with an optimum production output of 126 cubic yards per hour.

The Maxcrete Remix Surge Hopper could feed both pumps simultaneously, although one Schwing 3001 handled most of the subgrade work alone.

Long accepted for their efficiency in high-rise concreting, separate placing booms are commonly flown by tower crane to elevations high above the pump. However, builders are increasingly recognizing the benefits of remote booms on projects at zero elevation.

Tompkins used only one placing boom, a Schwing 28-meter unit mounted on a ballasted cross-frame, with its tubular mast bolted to in placed spread footings, to complete the entire mat, footing and wall subgrade work.

With a horizontal reach of 79 feet, the three-section boom enabled crews to cover 19,000 square feet before relocating the boom to its next pour target. Concrete delivery distance from the pump at the agitator drum to the separate placing boom averaged 600 ft. although Tompkins pumping personnel noted that the slick line extension sometimes ran to 1,000 ft. with no loss of pressure.

E-Quality produced a high-strength, 8,000 psi mix for column construction and a 6,000 psi mix for the foot-thick foundation slab. The mix design was a No. 57 3/ 4-inch crushed limestone and Master Builder Rheo Built 1000 additive for a 7-1/2 to 8-inch slump in the pump hopper. A naturally-washed sand with a fineness modulus of 2.7 created an excellent mix for pumping, said E-Quality President Diana Havenner Bowling.

Keeping pace with advancing formwork in the foundation, the concrete pump placed a steady 80 cubic yards per hour of slab, column spread-footing and core concrete. Alone, thick slabs for two of the building’s five cores each consumed 1,000 cubic yards. The remaining core footings required 600 to 800 yards. During these mass pours, the second Schwing pump was pressed into service.

By the time the grade level concrete was finished in July 1994, about 30% of the first of nine upper decks had been completed.

Adding separate placing booms to the project has established a current production force of two 40-meter, two 28-meter and one 42-meter remote placement units, as the contractors push toward completion of this tightly scheduled project. The original 3000 model pumps have been replaced by beefier Schwing 6000 and Schwing 8000 pumps.

“We’re working with a CTM computerized scheduling system,” says Tompkins’ general superintendent Bergin Tatham. “It helps us keep track of pour schedules that vary from 150 yards up to 2,000 yards. We are completing anywhere from 27 to 35 pours per deck.” 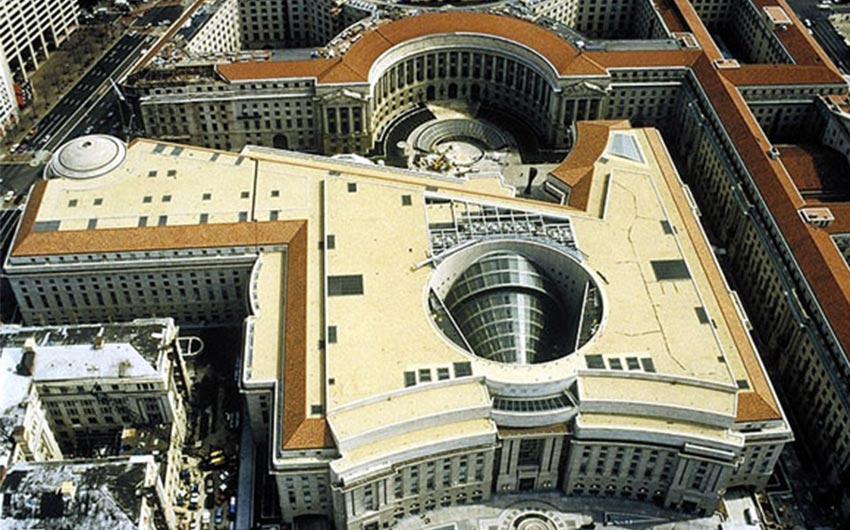 Tatham has spotted his Schwing placing booms for maximum efficiency on the sprawling jobsite. With the two 40-meter units positioned at the northeast and northwest corners, the 42 at the southeast corner, and the two 28-meter booms floating between the east-central and southeast sides, pipeline pumping distance is minimized, while maximum coverage is achieved.

Concrete forms for upper decks are supported by scaffolding that holds an aluminum-beam framing system and plywood decking. Load bearing concrete beams and pans create a 12-inch thickness, five inches between beams. Thickness is increased at drop head forms where concrete is puddled around columns.

Pumping production at eight hours per day, says Tatham, is averaging 85 cubic yards per hour, per pump. “At peak production, we’ve hit 110 yards with each pump,” he says. Deck forms are stripped every three days when concrete has reached 70 percent of its ultimate 6,000 psi strength.

Tower mounts for the separate placing booms are secured to pads at the base mat. The non-bolt, pin system of the frame – with a 39 ft. mast that extends through the 12-1/2 ft. ceiling centers – enables quick disconnect for boom relocation, a feature that is invaluable to the production schedule of the project.

Whatever the outcome of the current debate in D.C. regarding who told what to whom when regarding the size and cost of the Federal Triangle Building, one thing is certain: the concrete pumping operation is on the money.

The Original Article: “The Rest of the Story…” by Brundage Bone