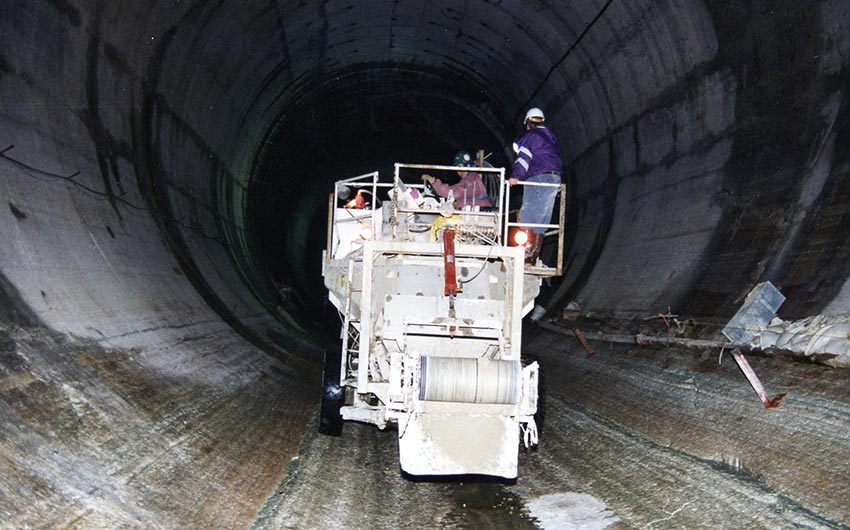 The original design of this project called for approximately 5 miles of 32′ 4” bore (30’ 4” finished) tunnel and a 4-mile – 24′ bore extension. Unfortunately, this tunnel design consisted of many turns, making it difficult for the Tunnel Boring Machine (TBM) to mine, resulting in lost time/delays due to TBM repairs. To expedite the project, the Joint Venture (J.V.) requested/was granted a change order to bore the complete 9 miles of tunnel at 32′ 4”, thus eliminating any time needed for a change out of the TBM or the concrete lining system.

After boring the tunnel, the J.V. was required to fully line the tunnel with a one-foot thick concrete lining. To save time, the J.V. decided to start paving the invert while the TBM was still mining. This presented them with three challenges. 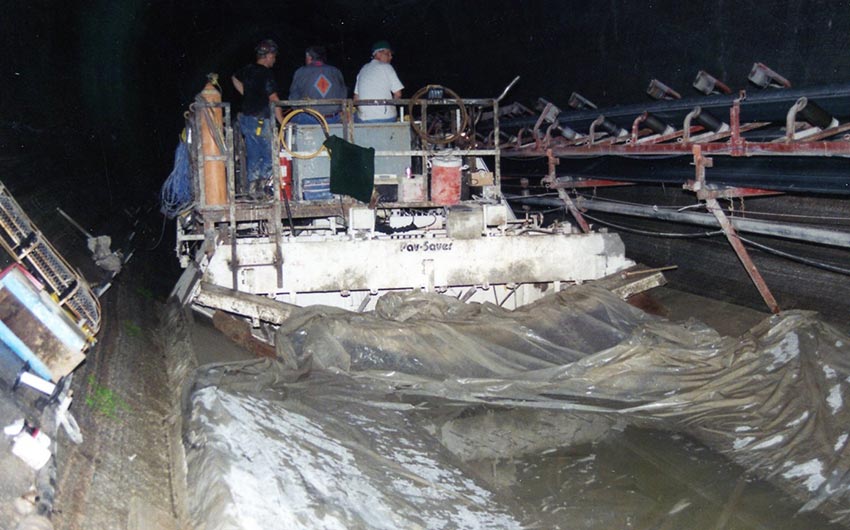 The J.V. turned to the concrete tunnel transportation experts at Maxon Industries for equipment to pave the tunnel invert while the TBM was still mining. Maxon proposed a shuttle system (utilizing two Maxon Agitors and a Maxon Mobile Maxcrete) for moving the concrete in the tunnel, and using a slip-form paver to pave the invert.

The local redi-mix company would deliver the concrete to the drop shaft. In the tunnel, the first Agitor would travel a third of the distance,  discharge the concrete into the second Agitor, which would travel another third before discharging into the Mobile Maxcrete that would transport the concrete the final third placing the concrete directly in front of the slip-form paver. 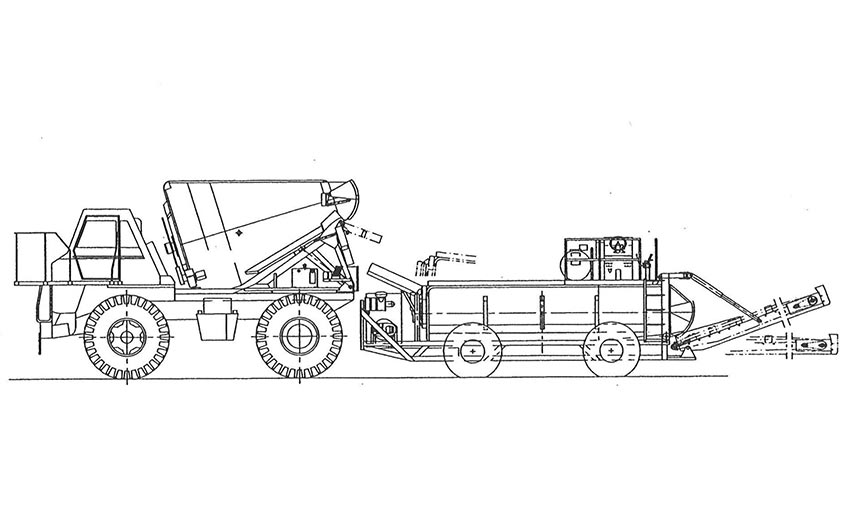 The J.V. utilized two 10 yard Maxon Agitors mounted on Jarvis Clark 426 mine chassis. The chassis allowed the haul units to run at equal speed in either direction without turning around in the tunnel. One of the two Agitor-Jarvis Clark chassis was also fitted with a front-loading beltconveyor to facilitate loading from the other Agitor.

The open top of the Agitor allowed it to be loaded at maximum speed at any of the 19 access drop shafts. The transfer times from Agitor to Agitor and then to Mobile Maxcrete were approximately 2 minutes each.

The last piece of the concrete delivery system was a specially modified Maxon Mobile Maxcrete that could both transport the concrete and place it exactly where needed. The Mobile Maxcrete included a short discharge belt conveyor that could easily swing to distribute concrete directly in front of the slip-form paver. Due to the curvature of the floor, concrete had to be discharge to the outside edges of the slip-form pavement to assist the paver in finishing the invert. The Mobile Maxcrete offloaded the full 10 cubic yards of low slump concrete in less than 2 minutes.

Once the Mobile Maxcrete placed the concrete for the invert, the J.V utilized a slip-form paver supplied by Pave Saver. The Pave Saver slip-form paver was equipped with tracks that were slightly canted to run on the curved floor of the tunnel. A one-inch slump concrete was used for paving the invert. If the slump were any higher, the concrete edges would slump towards the center of the slab. 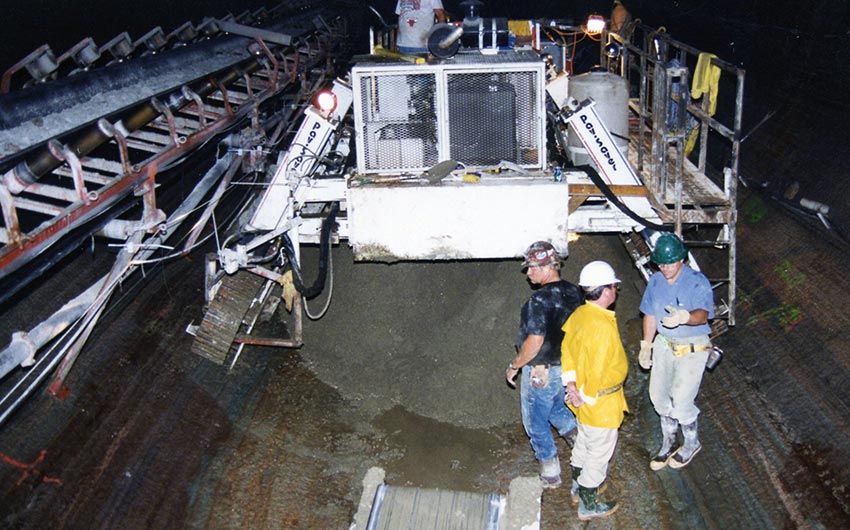 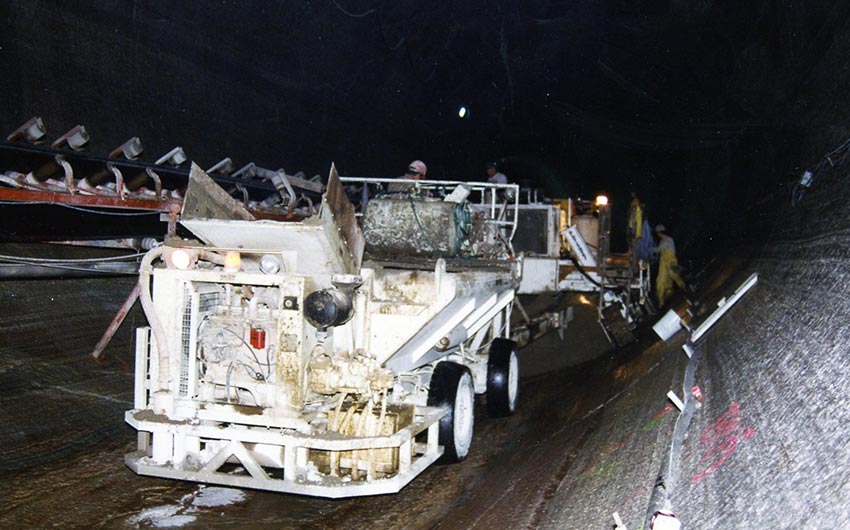 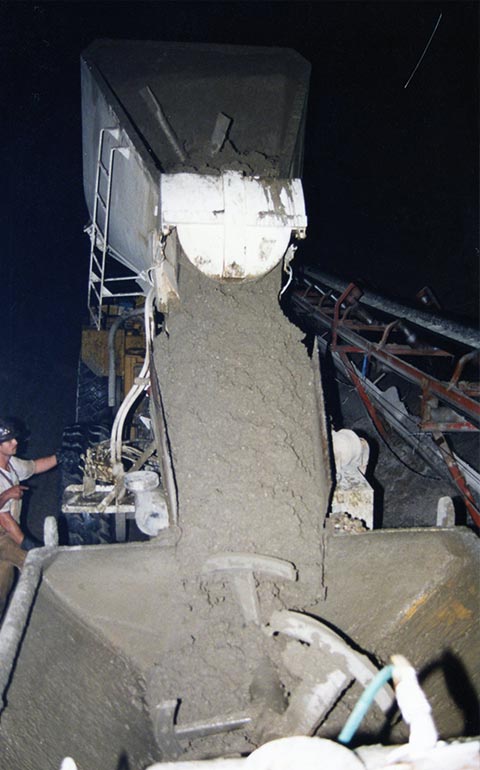 Using this shuttle method, production averaged 100 cubic yards per hour totaling 750 cubic yards per day. The concrete system for the invert began when the TBM reached the 4-mile mark, and was able to complete the invert within a month of the completion of the boring by the TBM. Once the TBM was removed and invert was completed, the J.V. used forms to place the arch, pumping concrete from the surface.

The concrete system incorporating the Maxon Agitors and a Maxon Mobile Maxcrete allowed for simultaneous paving of the invert and mining of the tunnel. The result: the J.V. was able to complete the job several months in advance of the originally schedule, saving time and money.